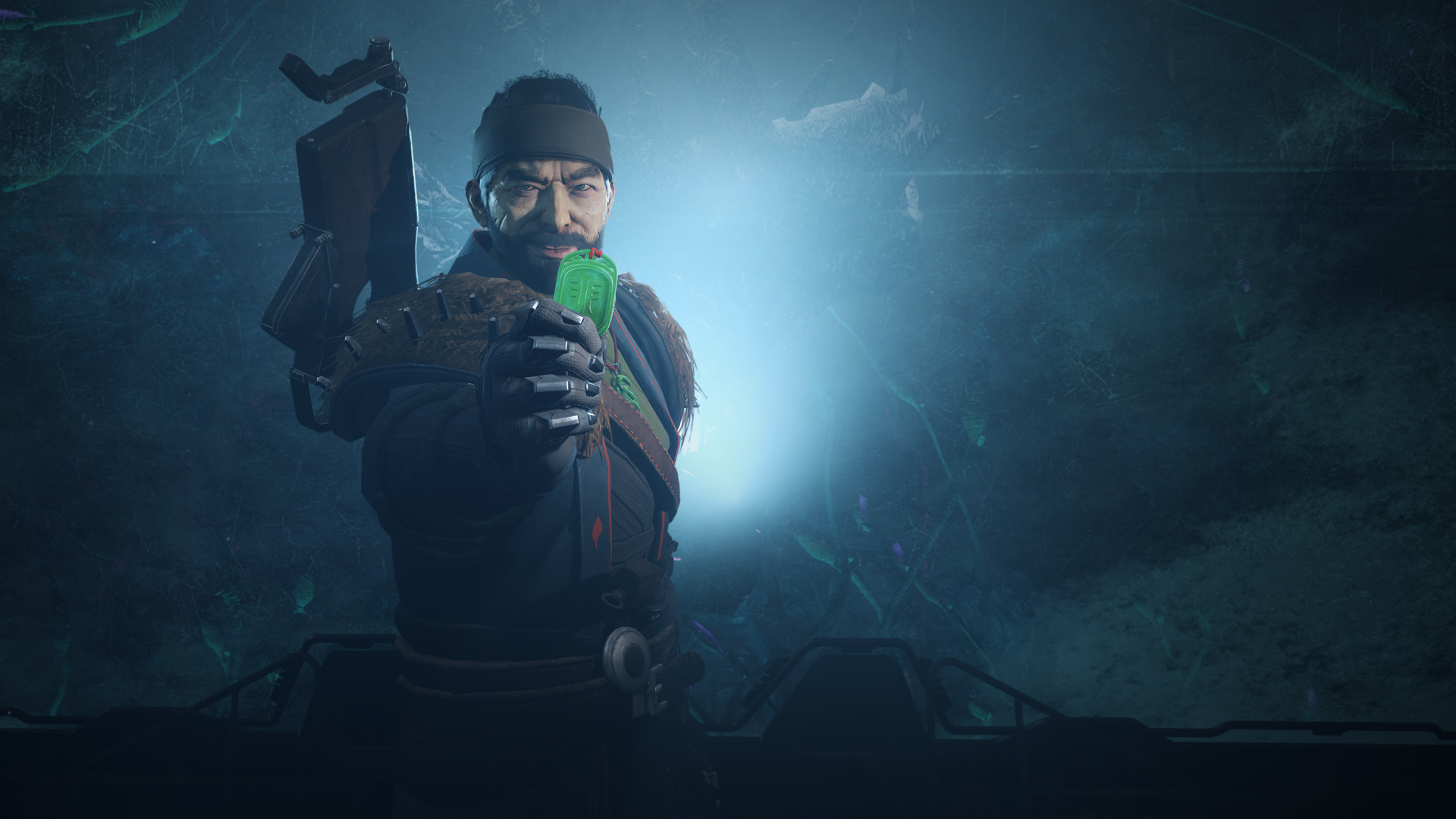 Game Flow
The objectives for Gambit are easy to remember, but the nuances of the game can come out in chaotic fashion if the game goes sideways for any number of reasons. It’s important to know not only what to do, but also why you do what you do and what you should do when things don’t go according to plan.

Round Start
When the game starts, both teams are directed to some area in their respective arenas to start destroying enemies. It’s important to note that ammo reserves at the beginning of each round are reset; reserves from previous rounds do not carry forward into new rounds. Each wave will yield approximately 15 motes each, depending on the arena, the enemy type and some enemy variants. Players should identify high-priority targets to eliminate in order to clear waves smoothly and without taking too much damage.

Initial Banking
The first two waves of banked motes tend to set the tone going forward in the match. The initial question to deal with will be whether to drop a few small Blockers on the enemy or to drop one Blocker, save motes and then return with a few larger Blockers. An important facet of banking to remember is that Blockers are fragile, but valuable. In truth, Blockers are not terribly formidable enemies, even in groups. They don’t do huge amounts of damage and they aren’t very durable. However, they are capable of forcing the opponent to spend resources: opponents will either spend resources to destroy Blockers (like special and power ammo) or they will use more easily obtainable primary ammo and spend time to destroy Blockers, instead.

Invasion Phase
The invasion phase is a less concrete time window due to the fact that teams can choose to hold invasions for use later on in the game. Some teams will decide never to invade and some teams may decide to invade immediately. Some teams will choose to stack their invasions in order to put heavy pressure on the opposing team’s attempt to gain momentum late in the game and some teams will opt for more subtle invasion timing. Regardless, once a team’s invasion portal is up, the game gets very interesting. Holding on to larger amounts of motes becomes increasingly risky and there’s generally an air of hesitation hovering over the arena. It’s at this point where you’ll be doing some observation to note the opposing team’s invasion style–when are they invading, who are they sending and which tools are they using to invade?

Applying what pressure you can and reacting to the pressure you may have to withstand will decide how focused your team can remain on gathering and banking motes. Many teams have members who are keen to invade, but will lack members who are willing to hunt invaders. Taking notes on the enemy’s invasion style can help you become the hero you need if you’re the lone soul willing to hunt the hunter. Find some spots where you can easily monitor two areas of the map at once and equip yourself to immediately get the drop on an invader to reduce the chances of a teammate getting picked off. If you are instead the only player willing to invade, take note of the enemy’s banking style. Are they going to for large banks? How often do they bank? Do they bank in groups? With a little information, you can choose a time to invade when the opposing fields are ripe for harvest. Invading with blocker support is even better, as it forces the enemy team into a rough spot–they either have to hunt you aggressively, spend resources to take out your blockers and bank, waste time by hiding or risk dropping motes. If you’ve primarily been playing a support role and have teammates who just can’t help but carry large amounts of motes, you may have to temporarily enlist in the Secret Service in order to engage in quick rounds of Protect The President. Sometimes, you will have to swallow your pride and escort teammates who are encumbered with too many motes by slaying blockers, providing covering fire against enemy hostiles and guiding them safely to the bank. When victory is your goal, it may be in your best interest to not view this job as beneath your abilities as a player.

Final Banking
The final banking time window begins once both teams’ invasions have been consumed or when teams are entering, approximately, the final 15 mote stretch to summon a Primeval. If your team is either in the lead or very close to the enemy team, make sure your larger mote-holders bank first. Help destroy enemies, but do not encourage excessive mote pickups. Equipping an emote that displays impatience or calls attention to players engaging in such behavior may help guide their attention to the bank. Make sure to bank for blockers before depositing any amounts of motes less than five. If you only need a few more motes and there is still a teammate out there who just will not bank to help you summon, be proactive. Go get the motes you need and return to the bank yourself. It’s a thankless job, but you’ll be one step closer to victory if you can do this instead of fuming at a teammate.

If your team is behind by about 20 or more motes, your goal is obviously to catch up as fast as possible, but with enough resources available after summoning the Primeval to actually try to win the round. If the enemy team has used up both of their invasions, you do not have to worry about getting invaded, so the only risk of dropping motes comes from interactions with the stage or with enemy hostiles or blockers. If you are confident in your abilities to hold large amount of motes, that will generally be the best way to proceed–you want to spend more of your time collecting and banking motes than you do traveling to and from the bank. Again, keep an eye on your teammates. Is everyone picking up large amounts of motes? If so, you probably don’t have to grab that many yourself (unless you’re very far behind), so you can help clear out the last blockers at the bank and safely drop hostiles from a distance so your teammates can pick up motes faster and more safely. While conservation of resources is recommended, if a super or power ammo is needed to clear a wave that will get you a summon and you risk losing the round, you will have to use your best judgment to determine whether or not to pull the trigger. Summoning a Primeval is always better than not summoning and power ammo does not carry over to the next round, so make sure to not give up even if you’re very far behind.

Primeval Phase
The best thing about Gambit is that it’s never over until it’s over. As of this writing (Festival of the Lost 2018), Primeval melting is getting more severe, but not all teams are equipped to do this quickly and efficiently. While you shouldn’t expect the enemy team to be incompetent, there’s not much you can do about a well-equipped team other than playing your best and helping your team where you can. With all this being said, do not fret if the opponent summons their Primeval first. As long as you can summon, you likely have a chance to win the round.

If your team summons the Primeval first, a few things are going to happen. First, the Primeval and a wave of additional enemies will spawn. Next, the opposing team’s invasion portal will open and stay open for the rest of the round, with a short cooldown after use. Your goal here is to drop the Primeval as fast as you can. In order to do this, your team will receive a buff called Primeval Slayer that stacks over time, up to a maximum of 10. Your team gains its first Primeval Slayer stack once one of the two enemies called a Primeval Envoy, a pair of enemies that spawn with the Primeval, is destroyed. Different Primevals will spawn different types of enemies in the waves that appear throughout this phase, but the Primeval Envoys are constant for all Primevals. If your team summons the Primeval last, the chances of success do not necessarily decrease as the time between the two teams’ summonings increases. Summoning last will grant a number of Primeval Slayer stacks to your team, up to a maximum of three less than the opposing team has at the time of your summoning. That is to say, if the opposing team has 5 stacks when you summon, your team will start the Primeval phase at 2 stacks of Primeval Slayer.

While burning Primevals down in increasingly shorter time spans will surely be the direction in which the game heads, what’s important to note is that teams can invade each other during this phase. An unchecked invader has the potential to put a round-winning stop to Primeval DPS, buying their team enough time to bury their Primeval. An important question to ask is: should you invade? Keep in mind that invading means you’re not in your home arena helping your team close out the round. The next question to ask is if your team is equipped for a proper burn. If you are not confident in your team’s ability to immediately drop the Primeval at three stacks or less, you may want to prepare for an enemy invasion. Get into a spot where you can still DPS the Primeval, but where you can put eyes on a potential invader if they decide to waltz through their portal. This part of the game takes a while to get comfortable with as a solo player because conservative play can cost the round if you make a miscalculation. Try to cover your bases, but know that you likely can’t predict every enemy move with full accuracy and, even if you did, you still have to make sure you work with your team to win the round. Do your best and if you can’t give any big cues to your team, try to at least follow theirs.

Post-Primeval
Once the round is over, either the match is done or you’re headed back to the Derelict to regroup for the next round. Once the round is done, it’s important to process what happened. Did you win or lose? By how much? Was the outcome due to chance or a clutch play or a crafted result? After that, take a step back. What did you contribute? What was your team doing? Where are their weaknesses and how can you apply your personal strengths to help cover those up? Take some time to also go over the enemy’s invasion style, but don’t forget to think about your team as well. If you have a teammate who is taking flight when they invade, make sure they have a power ammo drop waiting for them when the portal is ready. Try to increase their chances of success by dropping blockers in time with their invasion. If you did really well at tackling their invaders, make sure you give yourself space to do well at shutting them down in the next round, but be ready for the enemy to make changes. Now do it again, Guardian.

In the next article, we’ll go over strategies versus hostiles and opposing Guardians in depth.

"There's no shame in not knowing an answer, so long as you have a desire to learn."
-- Cyrus, Octopath Traveler